In 1996 we started a revolution in the shallow water industry

While many skiff builders have hung their hats (and hopes) on boats coined after hallowed fishing grounds, no flats skiff has ever lived up to the name Islamorada — one of the most celebrated and certainly daunting sight fishing destinations in the world. Leave it to legendary guide, boat builder and entrepreneur Hal Chittum to go where no skiff builder has gone before, designing a flats skiff that eclipses everything that has come before it.

In 1996, I formed a boat company to build high-tech shallow water fishing machines because there were no boats on the market that possessed the quality or designs that satisfied the needs of myself and other guides and anglers. Hell’s Bay Boatworks was founded, and forever changed the flats boat market. Chris Morejohn and I took our first Hell’s Bay prototype skiff to Mark Castlow’s shallow water boat show and displayed it in a small swimming pool to demonstrate the lightweight and minimal draft. I’ll never forget the comment the owner of a large flats boat company made as he looked at the skiff floating in the pool. “Yeah, let them try and build 20 with that type of construction, they will go broke.

Our mission was simple in description but difficult in execution – build the absolute state-of-the-art flats skiff with the best design and the latest high-tech composite materials and solve all of the problems we had tried to fix at Hells Bay.

A few years later, with more than one thousand Hell’s Bay boats on the water, that manufacturer and many others had to change their tune and try to adapt their boats to our high-tech methods and superior designs. We sold Hell’s Bay Boatworks in 2002, but I was very unhappy with the new management and their lack of understanding the goals, designs and ethics we had lived by. HB boats went a long way toward solving some of the issues we were fighting, but guides and anglers always wanted more – and they were right. We started the design process to build a new shallow water skiff. Our mission was simple in description but difficult in execution. Build the absolute state-of-the-art flats skiff with the best design and the latest high-tech composite materials and solve all of the problems we had tried to fix at Hell’s Bay Boatworks.

Our design team consisted of myself, a very enthusiastic naval architect and fisherman, Johnny Sebastian, Capt. George Sawley, Capt. John Kipp and several dozen of the best guides and anglers in the world. The initial hull design on paper took about four months. At that point, we built a temporary hull mold and built a hull using materials that would approximate the weight of a finished boat. Like all prototypes, it looked strange – a high tech epoxy hull with raw plywood decks and floor. The hull looked good, but George, John and I knew it was only a starting place. We had no idea how true that was. For the next eleven and a half months, we chopped, cut, added, removed, de-rigged, re-rigged and generally drove our naval architect crazy with the changes. We half joked we had him on suicide watch for 6 months! Every change we made might correct one problem while creating three others. Our friends were asking us if we were ever going to build this boat! After 9 months of testing and rebuilding, we were wondering if what we wanted was even possible. Finally, after 11 months of insanity and more than 60 changes to the prototype’s bottom, it all came together. We took the prototype to the Keys, ran, poled and fished with about 20 of the most critical guides and anglers and got a total thumbs up. Capt. Bill Knowles told me what I wanted to hear after his test ride. “Son, go back and build it now!” This advanced skiff weighs just 450 lbs. prior to engine and rigging it drafts 7” once fully rigged with 15 gallons of fuel. With a 12-degree dead rise and a completely new, patented hull design, this skiff runs drier, poles easier and quieter, spins like a pinwheel and solves all of the problems that had caused us grief for many years. These problems were cured with a combination of a radical design, the very latest advanced composite materials, the latest hull testing technology and the most advanced boat building computer software.

Capt. Bill Knowles told me what I wanted to hear after his test ride. “Son, go back and build it now!”

In 1996 we started a revolution in the shallow water industry with Hell’s Bay Boatworks when we built the best shallow water boats in the world. The new Islamorada 18 has now taken it to a whole new level. We invite you to come visit our company and see how we build this skiff. We will take the boat on the water and let you see what it can do. We are sure you won’t be disappointed. 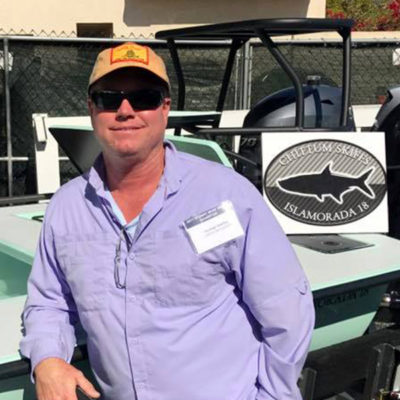 Stephen Ford Sales
Stephen Ford is the Texas rep for Chittum and a light tackle guide. He has a generous wealth of knowledge of skiffs and the Texas coast and he’ll be happy to share his experience with you on the water. Set up a demo with him when you are in the coastal bend and let him show you what these boats can do. 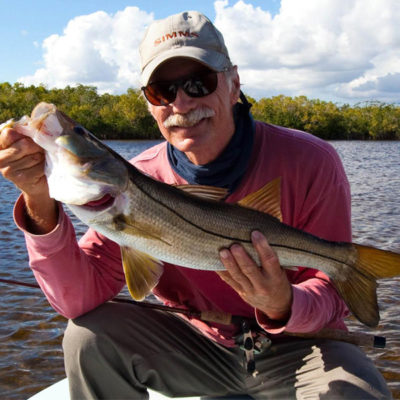 The skiff that caught the entire industry asleep at the helm.

by Capt. Greg Poland, GregPoland.com I met Hal Chittum when I was about 14years old. Out fishing with my cousin near a place called [...]

by Jim Sutton, 2011, Jacksonville.com Hal Chittum sits beside an old desk in a stark office at the corner of a plain white building [...]

The bar has been raised

by Capt. Jan Lemieux, Microskiff.com With current economic trends to downsize and “do more with less”, cautious souls might be inclined to hunker down [...]